From Teenage Modelling to Feminist Fashion

Before Year Here, my job was to stand behind a till in a shop the size of a bedroom for 55 hours a week. I was employed by American Apparel to sell dog hoodies and Y fronts for the minimum wage. This was not because it was my life’s ambition to do this, but because:

I was actually scouted by a big modelling agency when I was fifteen, so I’d got to know a bit about the fashion industry then. I loved coming to London to learn about photographers, journalists, creatives; and the glossy magazines I couldn’t get my hands on at home.

Yet the pervasive feeling from any photo shoots I did was discomfort. I overheard a gorgeous model being told to “hit the gym”: her waist wasn’t 23 inches wide like the rest of the girls on the books. I was also told that I was perfect just the way I was: I was pubescent, flat as a pancake, and seven stone light. I learnt that the industry was limiting women, not giving them the cultural (or, for that matter, physical) space that they deserved.

A few years later I got the job at American Apparel. Their hiring policy was mainly based on looks. I was made to sign a non-disclosure agreement about it – which I suppose I’m breaking now. My picture was taken and then graded at head office. I ignored this because I was so passionate about the company’s staunch anti-sweatshop mission, and about their campaigning on LGBTQ issues. But, over time, the combination of that culture, and their often pornographic, sexually-exploitative advertising material became jarring to me.

Being surrounded by giant pictures of buttocks in your day job might be weird for anyone’s standards, but I was especially creeped out when I discovered that the founder had sexually assaulted a number of the models pictured on our shop walls.

The Advertising Standards Authority deemed the uncensored image in American Apparel’s advertising gratuitous, voyeuristic and sexist. It was banned.

Throughout these years, and unfortunately akin to the experiences of most young women, I also faced sexual assault, unhealthy relationships, and more garden variety sexism.

These experiences fermented. At university I became radicalised. I attended feminist meetings, campaigned for women’s rights. I was elected a women’s representative, volunteered to promote positive body image among teenage girls, did Rape Crisis training to support survivors on their phone lines. During Year Here I worked with groups of complex needs homeless women, designing workshops and resources. The social sector was calling me.

Then the opportunity to create our own social venture came about on Year Here, and we wanted to do something to harness this amazing feminist energy. But the feminism that was hitting the headlines was all too often of the same kind: white, middle-class, and Guardian columnist-dominated. If we were going to learn anything from the previous waves of feminism before us, we needed to do things differently.

We’d been working with some of the most disenfranchised women; sex-workers, homeless women, survivors refugees, isolated elderly women. And we knew that women’s charities were struggling. A Women’s Aid report told us that half of London women’s charities had had their funding cut completely. Yet it seemed that no one had thought of championing the skills of these women, and bringing them into the mainstream, into the £26 billion UK fashion industry. 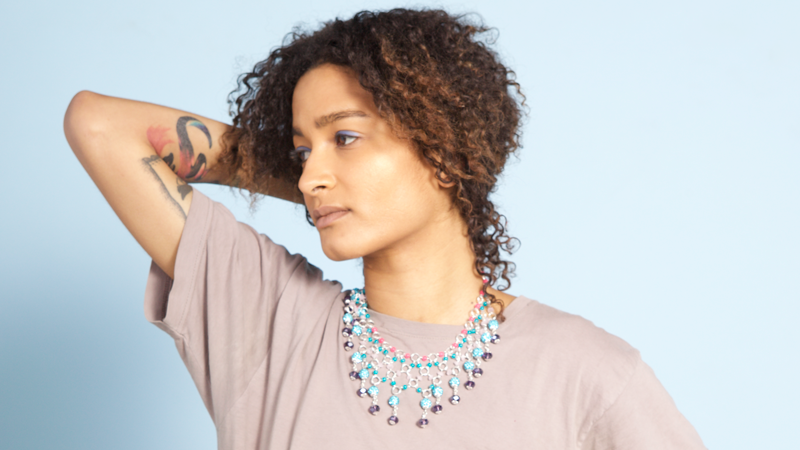 Daniela models a Birdsong necklace made by Sweet Cavanagh, a charity that supports women recovering from eating disorders or addiction.

So we came up with Birdsong, a fashion brand that sells beautiful clothes made by women’s groups across London. The opportunity to combine creative industries and raise money for women at the sharpest end of a patriarchal system was too good an opportunity not to go for. We want to allow customers to shop ethically, without compromising their feminist principles. To us, workers rights, sustainability and feminism are all different and equally important parts of our mission.

Perhaps the most exciting thing about building Birdsong was that we learnt how to do what we loved and do good. You don’t have to put up with a solution if it’s not good enough, you can create your own. If the Y fronts you’re selling objectify women, make your own Y fronts. If the fashion industry makes you feel like crap, create your own version.

In 2019, Sophie and her co-founder Sarah Neville were listed on Forbes’ 30 Under 30 social enterpreneurs.

Interested in applying to Year Here? We have two intakes per year, in the Spring and Autumn. Find out if we’re currently open for applications.