How jerk chicken inspired a new pathway out of homelessness

2015/16 Fellow Meg Doherty on the story behind Fat Macy's

Fat Macy’s is a social enterprise working with young Londoners living in temporary accommodation – providing a pathway towards independent living by inviting them to create and curate culinary pop-up events across the capital.

One dreary October afternoon, having spent a few weeks vainly attempting to understand the chaotic life of a homeless hostel, I stumbled across a Caribbean cooking session on the fourth floor. Weeks of residents’ grumbles about the hostel, housing benefit sanctions and evictions evaporated as the smell of grilling jerk chicken floated out of the kitchen and reggae boomed down the halls. Young men I’d seen spending hours sitting bored outside the hostel were working together, cooking up a storm, laughing. Piles of jerk chicken, rice and festival dumplings were passed around and swiftly wolfed down.

Then everyone was off. Back to mundanity. 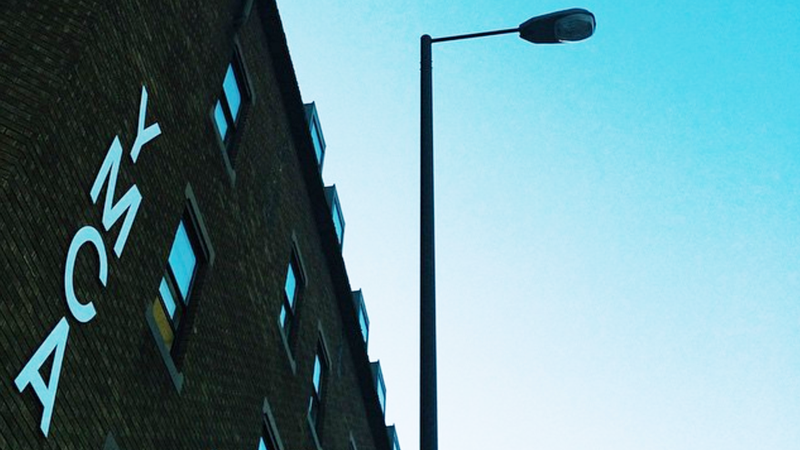 This hostel in North London where I was placed as part of Year Here stands gloomily on the edge of Crouch End High Street, an area otherwise populated with yummy mummies lunching on overpriced smashed avocado toast. The little culinary haven on the fourth floor of an overused and under-loved hostel kitchen and its bouji environs seem worlds apart (although arguably the quality of food is no different).

Locally, the hostel always has bad press. Youths in hoodies hanging around outside smoking, the smell of weed hanging in the air, bottles thrown from windows and police cars pulling up through the night – it was always those stories that reached Crouch Enders before anything else. But what I was experiencing didn’t match up: the hostel was full of young men and women who, for the most part, were easy going and up for a laugh.

Often a morning would start with a little quip or a anecdote from the day before. Getting to my desk in the morning took longer each day as there were countless people to stop and have a chat to. More than anything, it seemed people were misunderstood. They hadn’t been given a chance and had rarely been deeply listened to. Most of them were young lads who’d had a tough time and were looking for any opportunity to get out, to move on, to change. 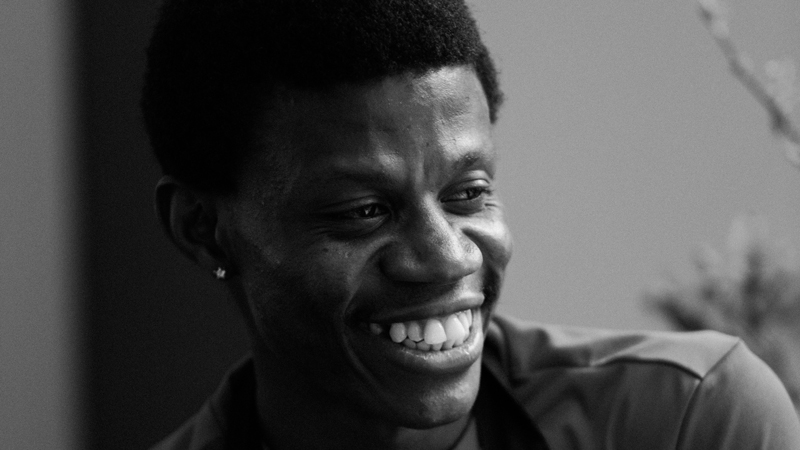 Emmanuel, a member of the Fat Macy’s team and resident of the YMCA

Services like the one I was placed in are intended to help people move on with their lives – and saving money is a big part of that. But, in my experience, the absence of money is the one constant in hostels. In a recent YMCA report, Delayed until Further Notice, over three quarters of those surveyed said that not being able to save for a housing deposit was likely to prevent them from moving on. Many hostel residents have jobs but, perplexingly, working more hours doesn’t help them save.

Kevin, one of our first Fat Macy’s recruits, explained to me how that maddeningly nonsensical truth comes to be: Due to the extremely high cost of housing across London – including the temporary accommodation like the hostel that Kevin lives in – residents depend on housing benefit to afford their monthly rent. Those who are unemployed pay nothing; rent is entirely covered by housing benefit.

Someone like Kevin gets £57.90 per week from Job Seeker’s Allowance. Working full time would get him more but his housing benefit would be cut commensurately. He’d be left with a similar amount each week to if he had never worked a single hour. The benefit system disincentivises work – ask anyone living in a London homeless hostel.

Why would you work a 35-hour week just to end up with an extra few quid to show for it? As a result, nobody can save anything. The YMCA found that, for 78% of people in hostel accommodation, not being able to afford a deposit is a key reason preventing them from finding somewhere to move on. In homelessness there is a lot of talk about ‘pathways’. Early in my placement, I started imagining this clear, tangible pathway out of homelessness. Yet the more I explored, it became apparent that I wasn’t going to find this so-called pathway – or how anybody was supposed to get onto it.

At this point, I started to wonder whether that little grotty kitchen could become something more. The food industry, especially the pop up food world, is booming. Every foodie blog and Instagram account is littered with pictures of the latest must-eat burger joint or hot new restaurant. Inspired by the Caribbean cooking session I’d witnessed, I started opening up the kitchen to residents more.

Every few times that I held sessions, someone new came along and they’d tell us about this great recipe their Mum used to cook, or about a dish their aunt made them when they were a kid. By working together in a kitchen, rather than sitting opposite each other in a clinical assessment room, people were much more willing to talk, to share stories and to open up about what was keeping them in the hostel. Almost every time, money and ‘the benefit trap’ came up. 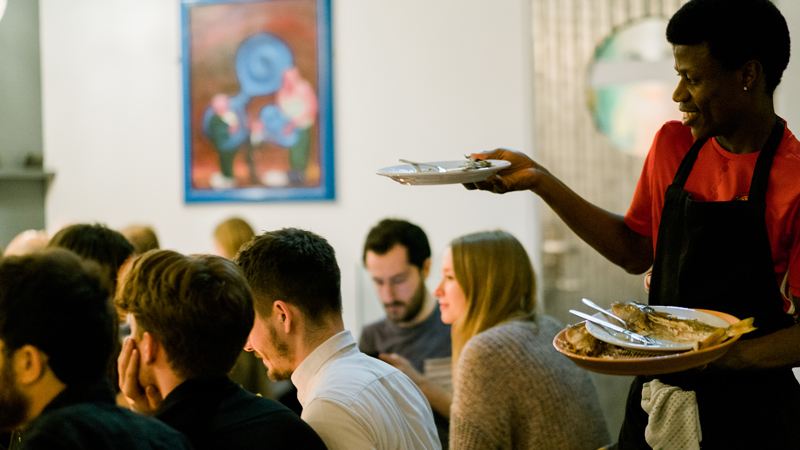 Fat Macy’s works with young Londoners living in temporary accommodation to provides a tangible pathway out of homelessness. Food is our vehicle – from supper clubs to catering and everything in between. We’ve spent a year cooking and trialling; hoping for the best, avoiding disasters and making it up as we go. At the end of it all, we’ve managed to create a social enterprise.

Here’s how it works: we recruit volunteers from our in-hostel training sessions and train them up for events. Our events are staffed almost exclusively by those living in hostels. We ask every trainee to sign up to volunteer 150 hours at our events – whether front of house, in the kitchen or as the humble pot wash. We then donate a percentage of the profits, equivalent to about £10 per hour, to our charity arm, which is a grant-giving trust fund. With every hour volunteered, the pot builds, until our trainees have reached their commitment of 150 hours. At this stage, we help them look for appropriate housing and, once everything’s in place, our charity grants the trainees enough money for a deposit, two forms of photo ID, a month’s travel card and some clothes for work.

In the first year we hosted over sixty events and fed over a thousand people. It’s undoubtedly been the hardest, most complicated thing I’ve ever done, but the feeling every time I go back into the hostel knowing that something, no matter how small, is changing for some of the residents is profound.

We’ve provided the framework for young Londoners to turn their lives around and get out of the situation they’ve found themselves in. We’ve proved that a pathway from hostel to home is possible – and, for us, it starts with great jerk chicken.

In 2018, team member Emmanuel received the keys to his first home. Meg and Fat Macy’s are working on opening a permanent restaurant in Peckham.

Interested in applying to Year Here? We have two intakes per year, in the Spring and Autumn. Find out if we’re currently open for applications.