The story of Francis – Rider, Gardener, DJ and Fundraiser at the Bromley By Bow Centre

“How about you, Miranda?”

His voice booms, so he needn’t walk up to everyone’s desk one by one but he does. Even in such a small act, he shows how much he loves caring for others. He struggles a bit with coordination so there is some precarious mug carrying and a few spillages before everyone has a cup of tea in front of them.

Before making the tea, he’d pottered around the room sprinkling every pot plant with a generous amount of water, lifting the leaves as he went to make sure the water didn’t bounce off them and spray a nearby computer or person. Despite his best efforts, it’s a fairly common occurrence that this does happen – always causing a giggle.

With cup of tea in hand, he settles down at the table in the corner and starts to document all of the pot plants he has watered this morning in a battered red folder with plastic sleeves. He takes a huge amount of care with this too as he struggles with writing. I find it strangely therapeutic to watch him.

Today, Francis is wearing his gardener hat. But he wears, and has worn, a number of hats over the years: from rider, musician and fundraiser to the less desirable ones: disabled person, homeless man and bereaved son. I met Francis at the Bromley by Bow Community Centre in Tower Hamlets, in East London. Over lunches, flower arranging classes, cups of tea and sitting in the flower garden, he revealed pieces of his life to me. 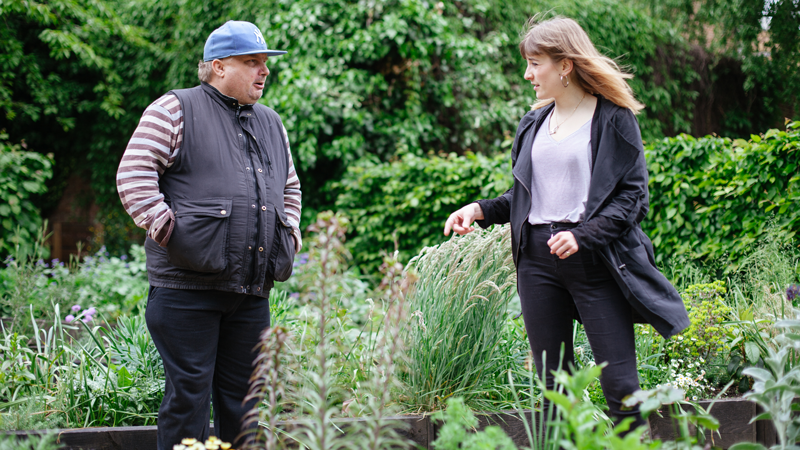 Francis and Miranda at the Bromley By Bow Centre

Together we look like chalk and cheese. Francis is nearly fifty and a tracksuit bottoms and polo shirts kind of guy. I am twenty three, an arty-looking girl in jeans and desert boots, not quite able to leave the house without make-up. We have become great friends.

I asked him if I could tell his story because it is beautiful and inspiring one. He has transcended all the difficulties of being a person with learning difficulties and tackled more life barriers than anyone should have to through kindness, perseverance and the support of the communities who gave him a place and a purpose.

Francis, in his own words, was a miracle birth. His mother and his father both had epilepsy. His mother had suffered a stroke when she was four, leaving her paralysed on one side of her body. Severe fits were no stranger to her while Francis was a child.

His parents met at an epileptic club in the leap year of 1964. A friend of Francis’ mother dared her to ask his dad to marry her. He said ‘yes’ and they married in 1965. Francis arrived shortly after on June 28th, 1966. During the expectedly problematic caesarean birth one of Francis’ eyes was damaged. He can’t see very well from it and it can sometimes look a bit vacant. Like his parents, Francis was also born with epilepsy. For these reasons and many more, life can’t have been easy for this family.

Despite their troubles, there was one thing that Francis’ parents would not let Francis do without, and that was his manners.

“They always encouraged me and brought me up to be polite to people and do things the proper way. There was one time when we were on holiday, and there was this lady and her kid and they were being really annoying and I called her a horrible old bag. My dad told me off for that.”

The ‘horrible old bag’ might not remember him as such, but Francis has matured into a lovely man; one of the most charming people I know. He is always quick to ask me how I am, how my friends are and what I have been up to.

Quite early on into my time working at the community centre, I agreed to start running the flower arranging class for the My Support Group which Francis was part of and which, at the time, was without a tutor. The group are a vibrant and varied bunch, all with disabilities.

I had never done flower arranging before, nor had I worked with this group of people, so I was fairly nervous. Along with the support workers and his girlfriend Maria, Francis knew exactly how to work with all of the members. He helped me see how we could work together, drawing from everyone’s strengths in the group. Rosemary used to get very sore hands, but she had a really great eye for colour and design, so she was ‘Creative Director’. Andrew enjoyed the flower arranging but got easily distracted or sleepy so he was given the role of delivering the flowers to the cafe.

Countless times in the first few months I would get in a fluster and forget the things I was supposed to prep for the session. I was commonly seen bustling back and forth from my office to the training room like the Mad Hatter. Francis would always pop up by my side and start helping out, washing vases, carrying our box of materials or just making me a cup of tea.

On one particularly hectic day, Francis met me bulldozing through the office door and I stopped to greet him. He looked at me and a little smile crept onto his lips, “You are a busy-body aren’t you?” I was left a little speechless. It was the first time I had noticed his sharp wit. After that, we had no qualms teasing each other regularly.

Francis doesn’t shy away from hard work so I was surprised to hear that his school teachers had held out little hope for his success at school. After primary school in Lambeth, Francis went to a boarding school for troubled children in Wessex. Although he didn’t go into detail, he revealed to me that he had been abused and that his teachers didn’t seem to believe in him. But, he assured me, that this had only served as motivation to make him try harder.

“What gave me so much satisfaction was that one of the teachers wrote in my report that they didn’t think I would stick at it, but I did stick at it and I became successful in later life.”

I had no idea how successful he was until the day the rosettes came out. 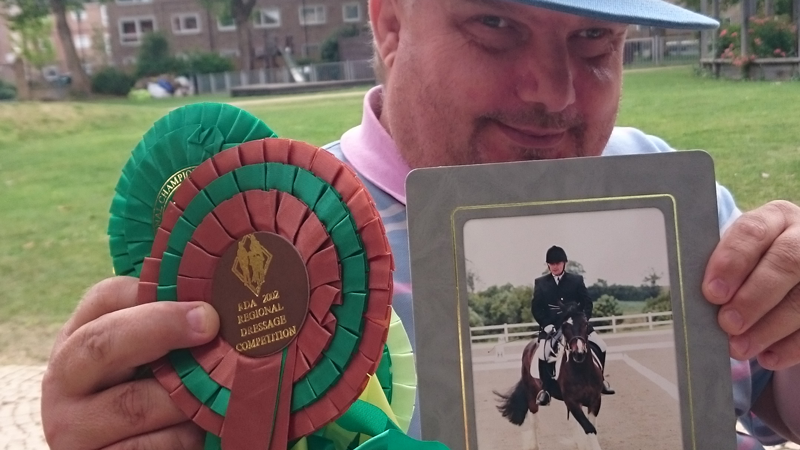 Francis with his riding rosettes from Riding for the Disabled.

We sat round the lunch table in the sun with my mum, and my sister. Francis was delighted to meet my mum because they had something important in common, and that was their affiliation with Riding for the Disabled, a national charity that helps young people with disabilities learn to ride horses.

Francis’ success as a rider was something that I didn’t discover until I had known him for a few months. When I told him that my mum used to volunteer with Riding for the Disabled near where I grew up, a ray of light shone across Francis’ face. During the days leading up to my mum’s visit, it was all he could talk about. He asked me over and over again for the details of her visit. “Your Mum is coming next Thursday isn’t she?” “What time is your mum coming again?”

When the day came, Francis arrived at the centre half and hour earlier that usual and was bopping about like a puppy. Shortly after her arrival, we sat down to lunch in the cafe and, soon enough, out came a big plastic bag for life. He showed us a couple of his rosettes that he had won in various Riding for the Disabled competitions: first prize for show jumping, second in the national championships, participant in this championship and that championship. A few more rosettes appeared, and then a few more. Then whole bunches of them started emerging. About thirty or forty rosettes appeared from his plastic bag, all crumpled and dusty. Even a cardboard-framed portrait appeared of a dashing young Francis, sitting up straight on a perfectly trotting horse. How had I not known about this extensive career in horse riding?

“It’s just the freedom of being on a horse, it depends what the horse is like, cos horses have different temperaments and all that”

Francis learnt to ride at school but his knack for his ability didn’t come to anything until later in life – perhaps due to the constant barrage of challenges that he lived through in his youth. He had been midway through an employability scheme when his father, living at home in Milton Keynes, needed Francis’ help. He had suffered several bouts of mental illness and was struggling to cope. Francis quit the scheme to care for his dad.

After his father’s death, Francis spent some time in a homeless shelter before his support worker managed to find him supported housing and he started another employability scheme. Then, in his late thirties, he got the job that put him back in the saddle. He was tasked with looking after the horses on Mudchute Farm on the Isle of Dogs. He began as a groom: mucking out, feeding and looking after the horses. I can imagine he was superb at it too. He is methodical, he doesn’t cut corners and, perhaps most importantly, his love of animals is unfaltering. Soon enough, mucking out and feeding turned into riding and rosettes. 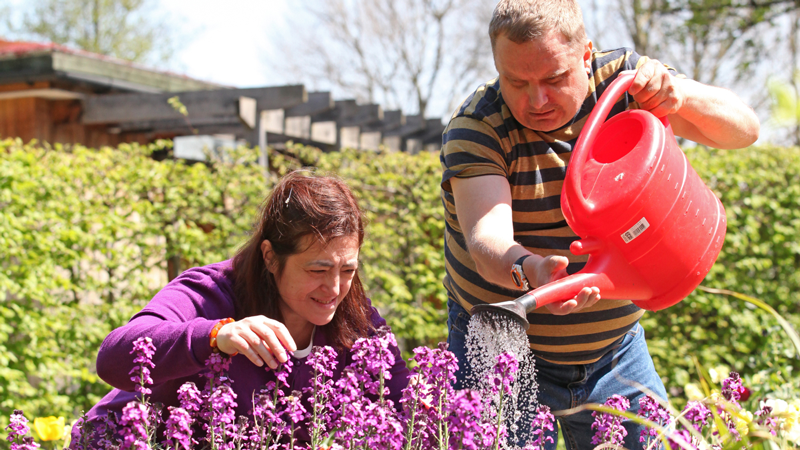 Francis with his girlfriend, Maria.

At Peter Bedford House, a supported housing project in North East London, he tried his hand at gardening for the first time. One of the staff there referred Francis to the Bromley by Bow Centre where he completed his Level 1 and 2 gardening qualifications and won funding for his gardening group at a crowdfunding event, as well as learning to DJ and meeting his girlfriend Maria.

“We just got paired up together and things just went from there. she just asked if I wanted to go for a coffee and just a chat and eventually led to me going up to her house and used to go out for dinner and go to the theatre.”

Mudchute Farm, Peter Bedford House and The Bromley by Bow Centre were the making of Francis. These organisations gave him roles, responsibilities and supported him to become independent. They gave him purpose, agency and passion.

When I asked Francis what he has learnt about himself by being at the centre, he said,

“I’ve just learnt that I’m a good person. I’m well liked and, you know, everyone I meet seems to be really nice.”

Isn’t that what we want in life? To be known as a good person and to be well liked. I know many people who are but how many have the maturity and self-assurance to be comforted by that knowledge? A man like Francis has had more than his fair share of short straws in life. It is testament to him, that through thick and thin, he has always been led by kindness.